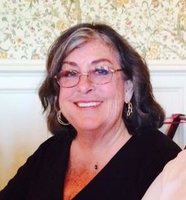 Patricia A. Johnson (nee O'Neill), 75, passed on to eternal rest on July 16, 2021, surrounded by her adoring family. Though Pat battled health issues in recent years, she never stopped fighting and continued to live as she most enjoyed, spending time with the people she loved! Patsy was the youngest of five children born to Irish parents, Brian and Kathleen O'Neill. The family planted roots in Rockaway Beach, NY, where she grew up beside her brother Jimmy (Mary) and three sisters Peggy (Arthur Hoyt), Kathleen (Jim Farrell), and Mary (Tom Kelly). She attended Stella Maris High School and developed a lifelong passion for the ocean, art and music, and Irish American culture. This upbringing would influence her and her family for generations. In 1977, Pat and her husband John (predeceased) moved to Lynbrook, USA, where they raised four sons and became fixtures of the community. She was a mainstay in several organizations, including school and district PTA's, the Moms & Dads Club, Gridiron Club, 4-H and the Boy Scouts, as well as the CYO and Sodality of Our Lady at St. Raymond's parish. She served in leadership for many groups throughout the years and was a staunch advocate for educational opportunity and resources for students with learning differences through the foundation of SEPTA. She was a resident of the Oceanside Cove since 2014, where she continued to make profoundly strong friendships that meant so much to her. Many cherished memories were made at the Sands and Point Lookout beach clubs, where Patsy could simultaneously entertain dozens of kids and their parents with food, games, and lively storytelling. She took great joy in caring for people, especially children. Her selflessness and generosity epitomized the woman she was and the values she lived by. Patricia is survived by her sons Peter, Thomas (Bernadette), Michael (Katie), and Brian (Meagan), grandchildren Magennis, Adleigh, and Pádraic, sister Mary and Tom Kelly, and dozens of nieces, nephews and beloved family. In lieu of flowers, donations can be made in Patricia's name to the American Heart Association and her parish of 45 years, St. Raymond's. . .