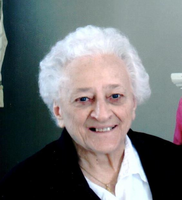 Janet Mary Moseman was born on September 25, 1930 and passed away peacefully at home on September11, 2021. Janet was the daughter of Naomi and George Moseman. She is predeceased by her brothers George, Richard and Warren and her sisters Eileen and Mary. She is survived by her brother Robert. AJ, as she was affectionately known, treasured her thirty six nieces and nephews. She always remembered their birthdays and special events with her famous greeting cards. A birthday was never complete until you opened your special greeting from Aunt Janet. She also graciously served as a surrogate grandma for her grand nieces and nephews at important family events. Janet worked for over thirty years in New York City. Neither rain nor snow would deter her from taking the bus and subway to her job at the United Hospital Fund. Janet's religious faith was most important to her. She was a dedicated supporter of her parish food drives and fund raisers and the many missions she supported will certainly mourn her passing. Sadly, Janet's life was marked by frequent illness and a number of surgeries. When doctors would ask for her medical history, a lengthy list was presented with date and details provided. She was always complimented for keeping her medical history up to date. Even with her numerous prescriptions, no medication provided more relief however, than a delicious bowl of ice cream! Janet spent her final years at the home of her niece Gerry and grandnephew Bryan. They were always attentive to her needs and welcomed family members, her aging friends and her hair dresser to their home. You always learned about family history from the good old days in Woodhaven to the dramatic move to Lynbrook during a visit with AJ. Her out of town nieces and nephews phoned her frequently. Her phone conversations with them brought her great joy as they updated her on their lives and their children. She was our "go to" person to keep up with all the news from all the cousins and their families. Janet led a long life enjoying her extended family and friends. She will be greatly missed by her family and friends. In lieu of flowers the family kindly asks you to donate to: St. Jude's Children's Hospital, 501 St. Jude Place • Memphis, TN 38105 LI Toy Lending Center for Children with Disabilities • PO Box 380, Point Lookout, NY 11569