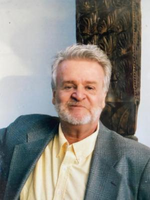 Edward William Dale was born on May 16, 1944 in Queens, NY, to his parents Catherine Rita Dale (formerly Kiley) and William Thomas Dale. After a long journey with cancer, one he handled with his trademark selfless grace, Ed passed peacefully with his family by his side on October 11, 2021. His boundless optimism, generosity and contented spirit remained powerfully present in Ed for all the years of his life. Ed spent his childhood with his parents and sister, Carol, in Hewlett and then Lynbrook, NY, attending St. Joachim's School and Hewlett High School. He shared endless stories of adventure and mischief with his large extended family, always resulting in displeased nuns -- especially with his cousins, Jim and Kevin Kiley. Ed chose to leave college and enlist in the Navy in 1963. He traveled the world on the USS Shangri-La and made the rank of E5 in three short years. In 1966, Ed was assigned to the River Patrol Force at Can Tho, Vietnam. He spent that harrowing and life-altering year completing missions along the Mekong Delta. Just five weeks after being honorably discharged from military service in 1967, Ed began his long career with IBM in Manhattan. He worked in various departments over the decades, including Finance, Marketing and Manpower Planning. He was a loyal employee and loved his time as a company man with IBM, eventually working in the Cranford, NJ office, where he raised his children, Renee and Eric, with his wife, Linda Dale. Although Ed moved back to Lynbrook when he retired, Cranford remained one of his favorite places, filled with joyful memories and some of the most fulfilling years of his life as a family man. In addition to accomplishing his life's stated mission of being a devoted father with happy and well-loved children, he took on his best suited role ever as a grandfather. First, to his favorite people on Earth, Griffin Henry and Gatsby Jane Astrid, and later to his beloved step-grandkids, Roan and Dory. There are no words to capture how deeply he loved them, how focused he was on the details, small and large, of their lives. When Griffin was a toddler, he began calling Ed "Whitebeard" due to Ed's soft, snowy beard and Griffin's interest in pirates. The name stuck and was how he was known to all of them. It's impossible to overstate the love and pride he expressed every single day for them, without fail, and with burning interest. It is harder still to imagine we won't any longer receive his requests for every update in their lives, or find him in his big, overstuffed chair waiting to greet us. His pure goodness as a person was an inspiration to them and will continue to be as they grow to adulthood. Ed loved the study of history, WW2, politics, civics, the cosmos, his "lowly" NY Mets, Jets, and NBA basketball. He was a voracious reader, loved math and numbers, along with Curb Your Enthusiasm, The Wire, and many other shows and films that he relished analyzing and discussing. Ed was incredibly funny. His blue eyes sparkled with laughter and shined with kindness. He gave to numerous charities benefiting children and also wounded veterans, which in many ways, he was himself. Ed is survived by his daughter, Renee Dale, his son, Eric Dale, sons-in-law, Brendan Vaughan and Andrew Gallagher, his adored grandchildren, Griffin and Gatsby Feather, and Roan and Dory Vaughan. He is also survived by his loving sister Carol Christy, his beloved nephews John Christy and wife Monica, Scott Christy, Brian Christy and numerous great-nieces and nephews. Ed was particularly grateful to his eldest nephew, John Christy, for all he did for him, for their enduring father/son-like bond and for John's independence and sense of humor, things Ed valued greatly in people. In addition, Ed will be remembered by many childhood friends who shared their lives and experiences along the way, beginning back at St. Joachim's School. The world feels lonelier without Edward in it, but still far better for him having been among us all. We are heartbroken, but truly honored he was ours. Visitation at Perry Funeral Home (Lynbrook, NY) on Friday, November 5, 2021 from 9:00am to 11:00am. Funeral service to follow at Calverton National Cemetery at 12:30pm. All family & friends are welcome to attend either or both. In remembrance of Edward Dale's life, the family asks that any charitable donations be made to the Wounded Warrior Project.