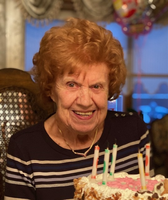 Wherever you saw Helen there was her Johnny. A love for the ages. The devoted daughter to Helen Parzych, was born in Brooklyn, NY. Helen was the younger sister to her dear brother, Henry. In her younger years she attended Polish Parochial School. Her family spoke Polish in addition to participating in the Polish customs. After attending a trade high school, she became an accomplished seamstress on bridal gowns at Miss Emily’s Bridal Shop. She later shared her talents with her daughters. Helen met her husband, John Francavilla through his best friend, Ted Cisek. They were married in September 1950. Together they moved to Lindenhurst, NY and built their first home. In 1953 Helen gave birth to their daughter, Linda. A second daughter, Donna, was born in 1955. Gail, their third daughter was born in 1957. The young family relocated to Lynbrook, NY to be closer to John’s work in 1960. Helen took pride in raising her daughters and provided a home filled with love, care and always enough food! She was a wonderful cook and baker preparing three square meals a day. Never a shortage of cake in her kitchen as she loved her sweets. In addition to her homemaking skills she had many part time clerical jobs as well as being a school crossing guard. She enjoyed vacations and traveling. Traditionally the family would take car trips to Florida. Helen and John also vacationed in Hawaii and Europe. After her children were grown, Caribbean Cruises filled with wonderful memories were enjoyed together. Holidays were very important. Celebrations with special outfits, decorations, special meals and gifts flourished. Every occasion was spent with family and relatives. Helen’s love for her Johnny never dwindled in their 66 years of marriage. He was more than her husband…he was her best friend. She was a feisty fighter who continued to show resilience and perseverance until her final moments. Helen is survived by her daughter, Linda Dailey(Bill Dailey), Donna D’Abate (Ed D’Abate) and Gail Frank. She is also survived by granddaughters Aubrey Dailey, Ashley Boghosian (Marc) and Katie Clawson (Corey).