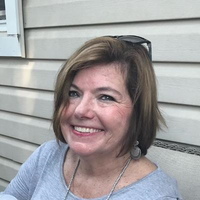 Frances Patricia Robertson, 62, of Riverview Florida, passed away unexpectedly on Saturday February 26, 2022. She was born on March 1st, 1959, to Barbara Carson and Tommy Robertson. Frances attended West End Elementary, North Middle School and Graduated from Lynbrook High School in the class of 1977. She was married to Chris Nassau, and they had 2 children, Nicholas and Jillian. Frances spent much of her career as a Florist. Her creativity, artistic eye and her warm, welcoming personality was a recipe for success. She opened two Flower Shops over the years that served the community of Lynbrook. As many of us so fondly remember, upon walking into the shop we were always greeted by a smiling Fran and tail wagging black Lab named Max. Fran was an avid sports fan and everyone who knew her, knew exactly what team was at the center of her heart. She lived and breathed for the NY Rangers. Going to MSG with Fran for a Ranger game was a guaranteed good time regardless of who won or lost. She took a lot of pride in watching her son play lacrosse for Lynbrook HS and at the collegiate level as well. In later years she enjoyed watching her grandchildren play soccer. Throughout Frances’s life she touched and impacted so many people with her wonderful personality and generous heart. Words that would describe Fran are Devoted Mother, Caring Grandmother, Affectionate Sister, Loyal, Funny, Thoughtful Friend. She will surely be missed by all who have been lucky enough to cross paths with her. Her legacy will live on by all the wonderful memories we have created with our dear Franny. Frances is survived by her children Nicholas (Samantha), Jillian (Pete) Stepdaughter Erica. Her loving Brothers Christopher Robertson (Anna), Craig Carson and Kevin Carson (Andrea). Her Grandchildren: Landon, Madeleine, Olivia and Mia. Her 9 nieces and nephews: Katy, Bailey, Aiden, Chelsea, Kaci, Collin, Evan, Ashley, Drew. Countless Aunts, Uncles and Cousins in Canada, England, Scotland and Australia. And of course dear friends, old and new. She was preceded in death by her Father Tommy Robertson, Mother Barbara Carson and Loving Stepfather Buddy Carson.