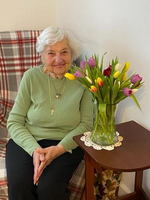 Emily E. Rein, 90, of 56 South Main Street, Alfred, NY passed away on July 12, 2022 surrounded by the love of her family and friends. Emily was a great daughter, mother, grandmother, sister, and friend. She was always a caregiver, offering friendship, food, and fun. Emily was born in Hewlett, NY on July 28, 1931 to August and Ethel Stein. Emily was fun loving and full of spirit. She grew up in Hewlett, NY and only moved to Alfred, NY late in her life. She started out an only child, but was happily joined later on by her sister, Carol. She married her childhood sweetheart, Eugene Rein, on July 8, 1951 at Trinity Church in Hewlett, NY. She worked hard throughout her life. First, for the telephone company as an operator where she was a member of the Pioneer Club. Later, she drove a school bus and handled the substitute service for Hewlett-Woodmere School District. She worked part-time for the HWSD as a dishwasher in the cafeteria. From that part-time position, Emily worked her way up to become the Director of Food Services for District 14; a position she held for many years. She was also a sun worshiper. Emily was a long time member and on the board of Silver Point Beach Club. She was an excellent cook and the ultimate hostess. Dancing, whether in the kitchen or during nights on the town, was one of her favorite things to do. She loved spending time with her friends and her grandchildren most of all. She enjoyed traveling and was always ready to make sure that others joined her on her adventures, whether it was going to another country or on a cruise or just into the city for a Broadway show. She was an active member of the Altar Guild and the head of the Sunday School at Trinity-St John’s Episcopal Church for many years. She was an avid volunteer and worked with the PBC,the Women’s Auxiliary of the Hewlett Fire Department, and several other organizations over her lifetime. Her love of sewing enabled her to help with costumes for the Drama Departments of Hewlett High School and Alfred-Almond Central School. She was predeceased by her husband of 65 years, Gene, who passed away on August 15, 2016. She is survived by her son and daughter-in-law, Jeffrey & Lorraine Rein and their son, Daniel and their son & daughter-in-law, Patrick & Laura; her daughter and son-in-law, Dawn & Anthony Mormino and their children, Katy, Peter, John, and Chris; her sister, Carol Schmidt, and an extended family of cousins, nieces and nephews. She has many friends that she leaves behind as well. The family of Emily will receive friends and family on Tuesday, July 19, 2022 from 6:00pm-9:00pm at Perry’s Funeral Home, 118 Union Avenue, Lynbrook, NY. A Funeral Mass will be held Wednesday, July 20, 2022 at 10am at Trinity-St.John’s Episcopal Church of Hewlett with Reverend Christopher Ballard officiating. The Funeral Mass will be livestreamed on the church’s website: Trinitystjohns.org. Burial will be in Trinity-St.John’s Cemetery, Hewlett, NY directly following the Funeral Mass. Later this summer, a reception in honor of Emily will be held in Alfred, NY. She spent a lot of time enriching the lives of those around her. In keeping with this, in lieu of flowers, the family requests donations to St. Jude’s Children's Research