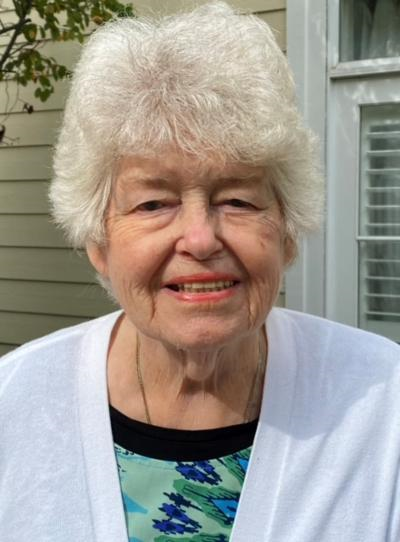 Please share a memory of Ellin to include in a keepsake book for family and friends.
View Tribute Book
Ellin Lynch passed away on January 8th, 2022 at the age of 84. She is survived by her loving family including her husband of 63 years, Philip S. Lynch. Ellin has five children Philip (Lisa) Lynch, David (Sharon) Lynch, Matthew (Dorothy) Lynch, Michael Lynch, and Margaret (William) Long. She also leaves behind her four grandchildren Kimberly (Douglas) Nelson, James Long, Finn Long and Dylan Lynch. Ellin is predeceased by her parents John and Helen Summerville, brother John Summerville and sister Patricia Wiltsey. Ellin was born in Brooklyn on October 20, 1937. Her parents raised her and her siblings with a strong Catholic faith. Ellin, John and Pat lost their young father John in 1950 in a train accident in Rockville Centre, but their mother Helen worked determinedly to provide for her children. Ellin was a graduate of Our Lady of Mercy Academy class of ‘55. She was involved with the Glee Club and met her husband Philip at a Fordham mixer in 1955. Philip and Ellin married on July 19, 1958 at Saints Joachim and Anne Church in Queens Village. Philip and Ellin welcomed three sons (Philip, David and Matthew) into their family early in their marriage. After Philip’s service in the United States Navy, Philip and Ellin settled in Cedarhurst and became involved members of St. Joachim’s parish. Later on in the 1970’s, ther welcomed their younger children Michael and Margaret. Ellin attended Molloy College and earned her Bachelor of Arts in English. An avid reader and word master, Ellin began working at Waldenbooks in Cedarhurst in the early 1980’s. She was employed there for 25 years, eventually becoming store manager. Ellin continued her love of literacy and excelled at crossword puzzles. Until her last weeks, she enjoyed the challenge of completing the New York Times crossword puzzles. Throughout her life, Ellin was involved in many community and church activities. Ellin was a Cub Scout leader, Drum and Bugle Corp mom, driver of the elderly and vision impaired, food pantry helper, and collector of items for the needy. Ellin set an example by graciously giving her time, energy and prayers to help others. Her most recent community service was her current role as Co-President of the Resident Council at the Bristal community where she lived with Philip. In 2015, Ellin faced the frightening diagnosis of bladder cancer. After months of chemotherapy and an intense surgery, Ellin kept her faith strong and beat her fight. She built her strength back and was able to enjoy the activities of her life again. In October 2020, Ellin faced another health crisis with Covid. After spending four weeks in the hospital fighting the virus, she once again came back strong after three weeks of intense therapy. In the fall of 2021, Ellin began to feel that something was off in her health. After many doctor visits, it was finally determined that Ellin’s body was invaded by cancer of the pancreas. Ellin was cared for in her last weeks by her loving family members. She held her strong faith until the end, keeping close to her heart the traditions and sacraments of Catholicism. In lieu of flowers, please make a donation in Ellin’s memory to the Interfaith Nutrition Network. https://the-inn.org/
To plant a beautiful memorial tree in memory of Ellin Lynch, please visit our Tree Store
Wednesday
12
January

Share Your Memory of
Ellin
Upload Your Memory View All Memories
Be the first to upload a memory!
Share A Memory
Plant a Tree