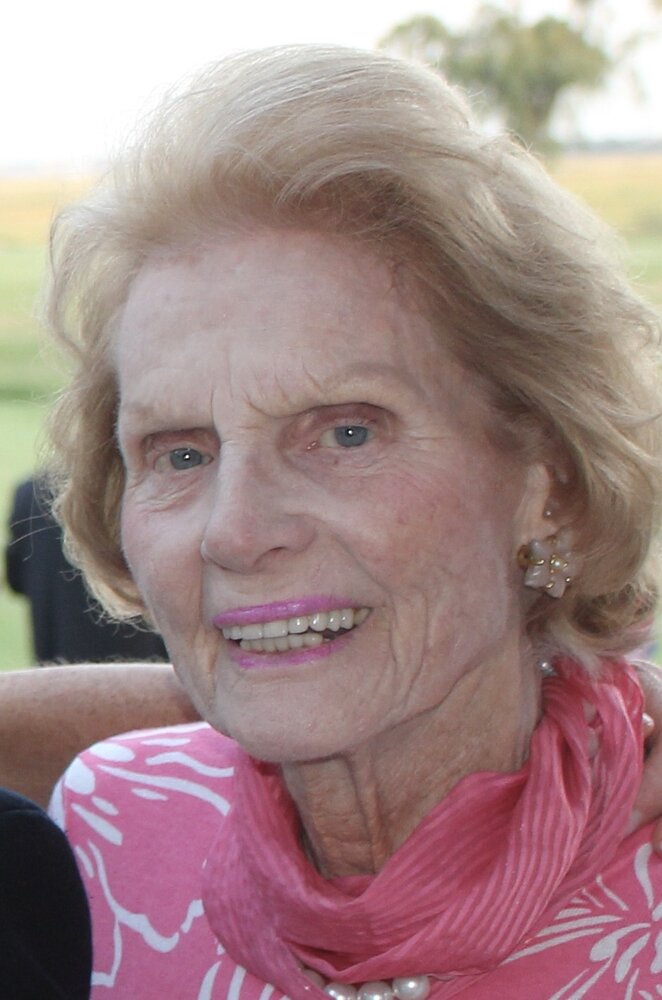 Please share a memory of Helen to include in a keepsake book for family and friends.
View Tribute Book
Helen ‘Heddie’ Van Voorhis Maitland Corroon October 12, 1927 - November 16, 2022 Helen ‘Heddie’ Van Voorhis Maitland Corroon of Vero Beach, FL, formerly of Lawrence, NY and Greenwich, CT, died peacefully after a life well lived. A mighty lady, Helen was a woman of character, elegance, poise, strength, and humor. She was as sophisticated as she was athletic, as creative as she was business minded. A world traveler and adventurer, a beloved wife, a loved and revered mother, an admired and trusted friend, Helen was a force of nature, who devoted her life to helping others, and who, despite what may have ailed her, never complained. Well into her 90s, when asked how she was doing she would respond with a wry smile “I am still here!” or “What you see is what you get!” Helen had three great loves - her beloved husband, Robert (Bob) F. Corroon, who pre-deceased her in 1994; her family and extended family of relatives and friends; and her faith, whose principles she lived daily. She was loved and admired by all, across generations, in her wide community that extended from her hometowns of Lawrence, NY and Greenwich, CT to Antigua, West Indies; Vero Beach, Florida; and family in Switzerland. Helen was born to James W. Maitland and Sylvia Wigglesworth Maitland in New York City, October 12, 1927, and was raised in Lawrence, NY. She was educated at the Lawrence School in Hewlett, NY and then at the Greenwood School, Ruxton, Maryland where she excelled as a horsewoman and field hockey player. Helen was always intellectually curious, and continued her education at Hunter College, NY and later on at Manhattanville College and State University of New York, both in Purchase, NY, taking courses in theology and computer coding before we all knew what coding was. Helen was a pianist, an exceptional tennis player, an avid golfer, skier, fly-fisher woman, and skeet shooter (she boasted of beating Ike Eisenhower by one shot at a skeet match at the Rockaway Hunt Club). A devout Catholic and a daily communicant, Helen lived her beliefs and was devoted to giving to her community through acts of service and generous charity, especially to the less fortunate. She was known for her style and was always elegantly dressed, usually with an ‘unexpected’ combination of pinks, purples, florals, and paisley patterns, coiffed and manicured with her signature pink nails and lipstick to match. She was fluent in French and traveled the world with her husband, hosted dinners and loved to gather friends and dance. Needlepointing and interior decorating were other passions and Helen launched her own decorating business in the 1980s. Helen worked as a Red Cross volunteer, an assistant nursery school teacher, first at the Church of Heavenly Rest, New York City and then at Lawrence School, and mentored homeless teens at Covenant House, NYC and was an early board member. Starting in 1975, with the move to Greenwich, she served as a volunteer in patient care at Nathaniel Witherell, in hospice care at Greenwich Hospital, only retiring at the age of 88, and at the Woman’s Exchange, where she was also a board member. She was a lifelong and beloved member of the Rockaway Hunt Club where she hosted weekly lunches and dinners for friends right until the end; of the Cedarhurst Yacht Club, and the Lawrence Beach Club, her favorite place on earth, except for church, and where she spent every summer; and of the Mill Reef Club, Antigua from 1974-2020. She was a generous donor and supporter of her parishes, St. Joachim’s, Cedarhurst; St. Michael’s, Greenwich, CT; and Tyrell’s Church, Antigua, which was built thanks to her financial support. She and Bob met at a party in Lawrence and were married at St. Vincent Ferrer in New York City on Feb 4, 1956. They raised their family in Cedarhurst until 1975 when they moved to Greenwich, CT. They later returned to her childhood community in their summer house on the Isle of Wight, Lawrence. A legend and a matriarch of the Corroon family, Helen is survived by her six children and in-laws, Holly (Marc); Bob (Andrea); Dick (Helen); Andrée (Bob); Christopher (Kari); Peter (Amy) and 21 grandchildren, Harper & Maitland Robinson; Bobby, Nicholas, Henry & Liv Corroon, Larsen & Lila Botur; Richard, William, George & Ava Corroon; Olivia and Eugénie Foss; Sophie, Peter and James Corroon; Finn & Larkin Corroon, and Reed & Ryker Kirkham; and numerous nieces, nephews and grand nieces and grand nephews. She was pre-deceased by pretty much everybody, but most importantly by her husband Bob, her sisters, twin Sylvia Horner Lynch, Andrée Dean, Nancy Ijams, and her brother Henry Mellen. A funeral mass will take place at St. Joachim’s Church, Cedarhurst, NY on Friday, December 9, 2022, at 11:00 am. In lieu of flowers, please donate to Covenant House (ny.covenanthouse.org) or Catholic Charities NY (catholiccharitiesny.org).
To plant a beautiful memorial tree in memory of Helen Corroon, please visit our Tree Store
Friday
9
December

Share Your Memory of
Helen
Upload Your Memory View All Memories
Be the first to upload a memory!
Share A Memory
Plant a Tree