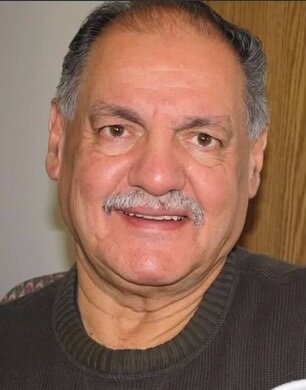 Please share a memory of Alexander to include in a keepsake book for family and friends.
View Tribute Book
We are sad to announce the passing of Alexander D. Farrugia on December 15, 2022. Alex passed away in his home in Merrick, New York surrounded by his family. Alex was born to the late Calc and Mary Farrugia in Zejtun, Malta on December 29th, 1948. Alex and his family left the Maltese Islands on March 16, 1954 and arrived in New York on March 30, 1954 on board the ship, the Nea Hellas. Alex arrived in a city that he would grow to love. The Farrugia family settled on the lower east side of Manhattan and later moved to Richmond Hill, Queens. In Richmond Hill Alex would meet his lifelong and loyal friends, the jokers, who refer to him as “Al Fuji”. Alex was married for 40 years to the late Laurie Farrugia, whom he loved very much. Laurie and Alex built a wonderful life together. Their home was always warm and welcoming and full of love. Alex served the New York City Police Department for 27 years and in the District Attorney’s office of the City of New York for 28 years. People typically don’t spend 55 years in a career they have so much passion for, but Alex did. He absolutely loved being a police officer. Alex has numerous awards from his time in law enforcement. The placards have words such as “dedication” and “achievements” and they are given with “respect” “admiration” and “affection”. These words epitomize Alex and how people see him, no matter the role he plays, whether it’s father, grandfather, husband, father-in-law, brother, uncle, or friend. Alex is survived by his daughters Jessica and Kate, his grandchildren Luka, Juliana, Bunny, and Roma and his two sons-in-law, Matt and Anthony. He is a beloved brother to Mary-Rose and Joseph, and he is known as Uncle Al to his nieces and nephews. His funeral will be held on Monday, December 19, at Perry Funeral Home from 4-8pm, 118 Union Avenue, Lynbrook, New York 11563. https://perryfh.com/ (https://perryfh.com/) A mass in his honor will be on Tuesday, December 20, at Sacred Heart RC Church in North Merrick NY at 11:15am. Please join us to celebrate his life. In lieu of flowers, please consider donating to the Feel-Good Foundation and Tunnel to Tower Foundation. https://t2t.org/ (https://t2t.org/) https://fealgoodfoundation.com/ (https://fealgoodfoundation.com/)
To plant a beautiful memorial tree in memory of Alexander Farrugia, please visit our Tree Store
Print
Monday
19
December

Look inside to read what others have shared
Family and friends are coming together online to create a special keepsake. Every memory left on the online obituary will be automatically included in this book.
View Tribute Book
Share A Memory
Plant a Tree