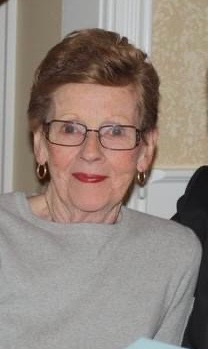 Please share a memory of Bernadette to include in a keepsake book for family and friends.
View Tribute Book
Bernadette Dalrymple (nee McGreevy), resident of Centerton, Arkansas and former longtime resident of East Rockaway and Valley Stream, New York, passed away on Tuesday, December 27, 2022. Born October 30, 1935, in Belfast, Northern Ireland to Charles and Ellen (nee Kelly) during World War II. Bernadette was just a little girl when Belfast was bombed and would have to endure countless hours in bomb shelters with her parents and six siblings until they were taken to a farmhouse in the country to escape the bombings. When Bernadette was 16, she went to London with a sister and a few years later, embarked on the trip of the lifetime to start her new life in America where she eventually became a proud American citizen. Bernadette worked at Schrafft's and soon met Daniel "Danny" at an Irish dance where they bonded over their love and traditions of their homeland, Northern Ireland. Before too long, they married and welcomed five children and settled in Valley Stream. Bernadette always had a strong work ethic and went back to work after Danny injured himself. She moved to Arkansas with her daughter, son-in-law and grandchildren, Susan, Greg, Owen, and Colette. Bernadette was very active in her Catholic faith so much so that she made visits to shrines in Europe to where Our Lady appeared with her sister, Marian and sister-in-law, Kathleen (wife of brother, John, deceased). Bernadette was always known for her rosary as she said it every night with her novenas and most recently, Devine Mercy. Bernadette was best known for her quick-witted humor, love for her family, generous spirit, and her love for the church. Bernadette will be remembered as a prankster and great storyteller which she passed on to her children, grandchildren, and great-grandson. Bernadette is survived by her children, Mary (Marie) Bucaria, Bernadette Mingione, Noreen Pennekamp, Susan and Greg Tesoro, Robert and June Dalrymple; her grandchildren, Michael, Peter, Jonathan, Griffin, Connor, Shannon, Daniel (Danny), Owen, and Colette; her great grandchild, Angelo. Bernadette is preceded in death by her husband, Danny, and her granddaughter, Danielle Bucaria.
To plant a beautiful memorial tree in memory of Bernadette Dalrymple, please visit our Tree Store
Tuesday
3
January

Share Your Memory of
Bernadette
Upload Your Memory View All Memories
Be the first to upload a memory!
Share A Memory
Plant a Tree